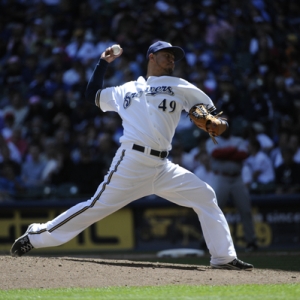 Well, we had an OK week when it came to series betting. We totally whiffed on the Royals over the Rays and Brewers over the Marlins, but we nailed the Reds (+125) over the Cards in that series' first three games, while the Cubs-Braves series was rained out in Game 3, rendering that invalid (although Chicago should have won the first two games if not for blowing a 5-0 eighth-inning lead in Game 1).

We also recommended taking Randy Johnson and the Giants in his bid for No. 300 against the Nats (that came a day late due to a rainout), and that also hit. So that's .500 for the week, although in total value we came out ahead.

Here are my best value recommendations for the series starting on Friday, with all odds from BetUS:

--Milwaukee Brewers (+125) at Atlanta Braves (-155): Yes, I'm going to roll the dice again on the Brewers. As noted above, the Braves by all rights should have lost both games to the Cubs and are below .500 at home. In addition, Milwaukee starts ace Yovani Gallardo in Game 1 tonight. He hasn't faced the Braves in two years but has allowed two runs or fewer in three of his past four starts. Atlanta Game 1 starter Jair Jurrjens has been almost as good but wasn't sharp last time out against Arizona - he was scheduled to start Thursday but the rainout pushed him back to today.

Jeff Suppan and Manny Parra are scheduled to follow Gallardo, while Javier Vazquez and Tommy Hanson are set to follow Jurrjens.

Speaking of Hanson, he is the National League's version of Rays star rookie pitcher David Price. Hanson makes his major-league debut a day later than originally expected, as his start also was pushed back a day. As good as Hanson might be, and his minor league numbers are ridiculous (1.49 ERA,169 opponents' batting average, 90 strikeouts and just 17 walks in 66 1/3 innings), I will always take a good-hitting club against a rookie pitcher.

This series also will mark the debut of new Brave Nate McLouth, who was acquired from the Pirates on Wednesday. He should upgrade what was by far the worst outfield in baseball (last in the majors with 10 homers), but the Braves are still very hitting-challenged. McLouth will hit third for Atlanta, dropping Chipper Jones to cleanup.

Milwaukee, which won six of nine against Atlanta last year, also is likely making a change for this series. Mat Gamel is expected to start each game at third base in place of Bill Hall, whose average is down to .211 and is terrible against right-handers, which is all that Milwaukee will face this series.

Both Ryan Braun and Prince Fielder are hot right now, so that's the final decider on taking Milwaukee in this series.

--Tampa Bay Rays (+200) at New York Yankees (-260): How can you not take a pretty good team that's getting +200 in a series? As usual, oddsmakers have overvalued the Yankees. Game 1 of this series should decide everything, as David Price makes his second big-league start against New York's CC Sabathia. Price was dominant in his starting debut last week against the Twins, and the Yankees haven't seen him, which should be an advantage for the rookie. Sabathia has been great of late, going 4-0 with a 2.08 ERA in his last five starts.

But if the Rays can pull out Game 1, I love Matt Garza to beat an inconsistent Joba Chamberlain in Game 2. Andy Sonnanstine, coming off his best start of the year, opposes A.J. Burnett (who is appealing his suspension) in the finale.

The Rays are the top-scoring team in baseball and have won five of six games. They are 2-0 at Yankee Stadium this season and 3-2 against New York overall. Tampa Bay is not likely to have star third baseman Evan Longoria in the opener because of a hamstring injury, but he said he would be in the lineup for sure by Saturday (Friday is not out of the question, and he can at least pinch-hit). The 2008 AL Rookie of the Year went 4-for-10 with two homers and four RBI in the earlier two-game sweep at the new Yankee Stadium.

Another positive sign and a reason to like Tampa Bay in this series is that B.J. Upton is finally waking up. After hitting .160 with no home runs in his first 26 games, Upton is on an eight-game hitting streak and batting .440 in that stretch.

This series is a four-game set, but only the first three games count for betting purposes on BetUS.