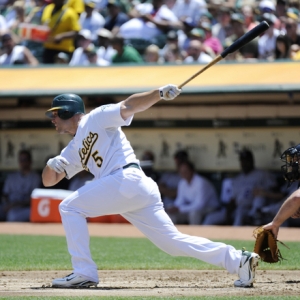 I'm sure there's a joke there with those similar last names, but I can't think of it.

Thanks to the folks at WagerWeb, you can bet on which of those two guys gets traded first (under sporting events/news):

There are a few reasons why it probably will be Halladay who goes first. Toronto, after a strong early start to the season, just can't contend in the loaded AL East, and GM J.P. Ricciardi has pretty much admitted this and said he will listen to offers. The Jays get all of those good young pitchers who have been injured all season back next year, so that's the timeframe when they are really targeting to try and retool. Ricciardi seemed to send a message when the team recently cut struggling former closer B.J. Ryan despite owing him some $10 million next year - that it's time to start over.

Toronto still needs to clear payroll, and the Jays aren't going to find any takers for overpriced outfielders Vernon Wells and Alex Rios (there's a small chance Rios could go). Third baseman Scott Rolen also is on the block. So the Jays would seem to have much more motivation to make a deal quickly. Already the Phillies are being labeled a leading contender for Halladay, who calls his chances of being dealt at 50-50 and says he wouldn't mind pitching in the NL. The right-hander has a no-trade clause but would waive it to pitch for a contender.

"I think as a player, there's that will to win, that will to do it in October, and basically that's what all of this has been about," said Halladay. "I would like that chance."

Halladay is under contract at a reasonable number through next season. Expect perhaps the Cardinals, Dodgers, White Sox (who already had a deal in place for Jake Peavy) and Angels to be other leading contenders. By most accounts the Yankees and Red Sox will sit this one out, and it's likely Ricciardi doesn't want to deal his ace in the division.

Holliday, on the other hand, would just be a rental player with his contract up after this year. Oakland is out of the race at 12 games back in the AL West and is one of the worst offensive teams in the league even with Holliday.

But GM Billy Beane loves those compensatory draft picks he would receive just by offering Holliday arbitration after the year. Plus, the former NL MVP runner-up has struggled after coming over from the Rockies, hitting just .278 with eight homers and 43 RBI -- he hasn't homered in 32 games (since June 5). Perhaps he was a creation of Coors Field after all? Holliday's value is probably a little low right now, but one injury to a contender could change that.

The Braves could really use another outfielder (is Ryan Church really the answer?), and the Red Sox likely will be interested. However, the logical spot for Holliday would be the Giants, who are hitting-needy, lead the wild-card race and have plenty of good prospects to offer Oakland in return.

In addition, the A's recently traded for Padres outfielder Scott Hairston, so perhaps they are preparing for the eventuality of Holliday being gone sooner than later.

Look for both players to get dealt, but for Halladay to be the first to go. His GM seems a bit more motivated, mostly by financial reasons, than does Oakland's Beane at this point.