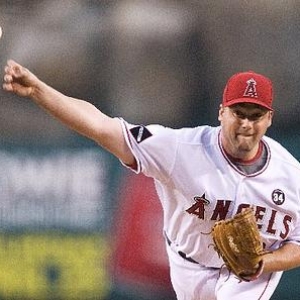 When you think about pitchers that reward bettors with consistent wins and heavy profits it's tempting to think of the big names - Santana, Halladay, Sabathia and so on. Johan Santana and Roy Halladay are making people money but they fall far behind the best and brightest of the financial performers his year. What is striking about this list of the top five pitchers against the spread that we are about to look at is how unlikely it is - the names range from the unexpected to the highly unlikely.

Here are the top five most profitable pitchers in the Major Leagues so far this season:

1. Matt Palmer, Los Angeles Angels - Palmer pitched the first three games of his career for the Giants last year, and the 30 year has already spent time in Triple A this season. That's hardly the formula forlong-term bettig success, but it is certainly working right now. He has a spotless 5-0 record, and the team is 6-1 when he hits the mound. It's hard to put your finger on exactly what is working for Palmer. His ERA is not stunning at 4.06, and he has as many walks in his career as strikeouts. The other thing that's surprising about this one is that he's only averaging about six innings per start, so his success has relied on the worst bullpen in baseball. It all doesn't make much sense, and it surely can't last all year, but those who have been lucky enough to back him this far are up almost eight units.

2. Josh Johnson, Florida Marlins - This is the least surprising of the five names on this list; I'm not the only one who was expecting big things from Johnson this year. He was 7-1 in limited action last year, and he's come back stronger and more focused this year. His 5-1 record is nice, but what's even more impressive is how well the team responds behind him - the Marlins are below .500, but they are 10-3 when Johnson gets the call. The performance is no fluke, either - his ERA is down almost a point from last year, and he has about four strikeouts for every walk. It also stands out that he's averaging one fewer pitch per inning than he was last year. Johnson may never turn into a top class ace, but he's quickly becoming the kind of guy that can be on my team any day. And a guy I'll happily bet on as well.

3. Eric Stults, Los Angeles Dodgers - Coming into the season the Dodgers looked like they had a lot of issues, and most of them were with the starting rotation. That rotation deserves as much credit now as it was getting criticism before the season. Stults is on the DL since the beginning of June, but before that he was getting his job done. In nine starts he's just a decent 4-2, but the team is 7-2 when he pitches. The strong Dodgers bullpen helps, but there has to be a higher power involved here - his numbers don't back up his record. Coming into this year, Stults was just 4-7 in a three year career. This year he has just five more strikeouts than his 25 walks. His ERA is 4.80, and he's averaging just five starts per game. The fact that he is where he is on this list proves two things - the Dodgers are playing some very good baseball, and picking out winning pitchers isn't easy.

4. Chad Billingsley, Los Angeles Dodgers - This one at least makes more sense than the last Dodger. After all, Billingsley came into the season as the de facto ace of his staff. He's lived up to that billing, too - he's 8-3 with a 2.73 ERA, and the team is 10-3 when he is on the mound. I saw Billingsley pitch a spring training game against the Rangers in Arizona this spring, though, and nothing I saw there made me believe that he had this kind of a start in him. He was pretty lousy, then, and his release point was all over the place. He's found that consistency, though, and it has led to a strong start and early talk about Cy Young contention. Billingsley has improved every year he's been in the league, so he could certainly sustain this start and this fair treatment of bettors. The margin of error is small, though - he has consistently been a heavy favorite in his games, so even a short slump would be costly to his backers.

5. Scott Feldman, Texas Rangers - How unlikely is Feldman's success this year? Despite starting 25 games for the Rangers last year, Feldman didn't crack the weak Rangers rotation out of spring training, and toiled in the bullpen for a month before getting a chance to start again. He's made the most of this second chance, though - he's 5-1 in nine starts, and the team is 7-2 when he gets the ball at the start of the game. He has handled pressure well, too - one of his best performances of the season came at Yankee Stadium two games back.