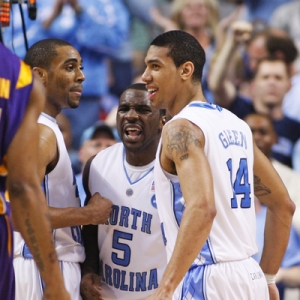 If you want to see a crazy amount of NBA draft odds check out betED, as the site has just about every scenario covered. With that said, I will hit the draft hard for the next few days. Blake Griffin is most certainly going to be taken No. 1 overall by the Clippers on Thursday night - thus dooming Griffin to a career of mediocrity if you go by past No. 1 overall Clipper picks.

In this story, let's hit on the fate of the North Carolina Tar Heels in the draft. After all, Tyler Hansbrough, Ty Lawson and Wayne Ellington all could have been in last year's draft but chose to come back and try to win a title, which of course they did impressively.

--Who will get drafted first, Hansbrough or (Arizona's Chase) Budinger? This is the all-Caucasian bet, apparently. Hansbrough is -325 on this one, with Budinger at +225.

Supposedly Hansbrough is one of the draft's late risers, as he did measure the same size as Griffin. Plus he's one of the rare sure things this year. As in, he surely will be a hard worker and solid contributor off the bench, even as a rookie, but probably won't be a star. Some reports have Hansbrough going as high as No. 11 to the Nets, and I know the Bulls also like him at No. 16 but may trade up to No. 11 because they have an extra first-round pick they don't want for financial reasons.

I haven't seen a single mock draft that lists Budinger ahead of Hansbrough, so you can probably feel safe betting on the former National Player of the Year. Look for Hansbrough in the teens and Budinger in the late 20s.

--Who will get drafted first, Hansbrough or Ellington? Hansbrough is just a -220 favorite here, and that's a bit surprising since Ellington is rated below both Hansbrough and Ty Lawson. Ellington is a nice shooter but not much else. The more interesting bet might have been whether Ellington goes before Lawson.

--Who will be the first Tar Heel selected? Ellington gets the longest odds at +1000, but there's no way he wins this bet. You would have to stick with Hansbrough (-155) here because the problem with Lawson is there are several point guards rated ahead of him, with Tyreke Evans, Ricky Rubio, Jonny Flynn, Jrue Holliday and Stephen Curry all likely needing to come off the board before someone would look at Lawson.

--Who will get drafted first, Ellington or (Georgetown's DaJuan) Summers? I like Summers at +105 here. The former Hoya can play either small or some power forward, while Ellington probably is locked in as just a shooting guard. Summers has an NBA-ready body right now.

--Will Ellington be drafted in Round 1 or 2? I've checked dozens of mock drafts and haven't seen one where Ellington wasn't in the first round. Thus that option is -185. Look for him to go to Oklahoma City at 25 or Chicago at 26 if the Bulls still hold that pick.

--How many players from the ACC will be drafted in the first round? The over/under on betED is 5 ½, and the over seems like great value. The three Tar Heels all should be first-rounders, as will be Duke's Gerald Henderson. So really that only means that Wake Forest's James Johnson and Jeff Teague need to go in Round 1 to win on the over, and they both are expected to. Florida State guard Toney Douglas also has a late-first-round grade, so take the over on this one - it's the best bet on the board involving the Tar Heels.