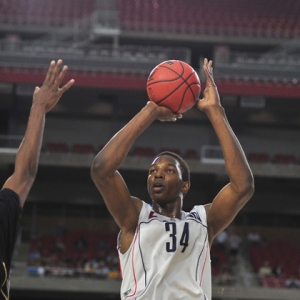 With the Los Angeles Clippers taking all the uncertainty out of which player will be chosen first in Thursday night's NBA Draft (although how can you not just put a few bucks down on betED's odds of Blake Griffin playing for a team other than the Clippers at +3500), let's see if we can give you some NBA Draft predictions for betting the rest of the Top 5 of the draft.

Memphis currently holds the No. 2 pick, and the Grizzlies are clearly shopping it. At first Rubio was targeted here, but the Grizzlies don't need a point guard unless they already are giving up on former lottery pick Mike Conley. Plus, Rubio reportedly doesn't want to play there. In fact, Thabeet, the UConn center, might not want to play there, either, as he canceled a workout even though team owner Michael Heisley flew in specifically to watch Thabeet, who said he had a shoulder ailment.

Thabeet's agent had a pretty good quote on his guy missing the workout: "He's not going to block shots in a workout, and that's what he's going to do in the NBA. What are they going to do, have Hasheem shoot three-pointers?"

The Memphis Commercial Appeal says it's probably 50-50 that the Grizzlies trade this pick. And really, that's what you are betting on - whether Memphis keeps the pick or grabs someone to trade. I believe if the Grizzlies keep it that University of Memphis guard Tyreke Evans is the choice, and that's nice value at +600. Thabeet certainly would make sense since the Grizz were the worst rebounding team in the league last year. And he did meet with Heisley during the pre-draft combine, so maybe his excuse for missing the workout was true.

Unfortunately, I look for Rubio to go in this spot. Someone will either trade up with Memphis before the draft, or the Grizzlies will pick him as a pre-arranged deal - probably with Sacramento.

At No. 3, assuming it's either Rubio or Evans at No. 2, Thabeet would seem a lock here to Oklahoma City. The Thunder have some nice scoring pieces in Kevin Durant, Jeff Green and Russell Westbrook. Some forecasts have Harden going here, but his stock is reportedly down slightly. Remember that the Thunder had a trade that was eventually nixed for Tyson Chandler, who is a similar player to Thabeet (i.e. defensive demon but offensively challenged).

The Sacramento Kings desperately need a point guard, so I would rule out anyone but Evans and Rubio here. Which one it will be depends on whether the Kings and Grizzlies make a deal. Holiday, the UCLA point guard, would be too much of a reach at No. 4. Harden plays the same position as Kevin Martin, so the Kings wouldn't need him.

Nearly every mock draft seems to indicate that the Washington Wizards will take Harden here if they can't trade the pick, which they are desperately trying to do. I don't get that, since the Wizards have plenty of scoring with Gilbert Arenas (who plays Harden's position), Antawn Jamison and Caron Butler (whom the Suns asked about for Amare Stoudemire).

The Washington Post says about half the league has called about this pick. The Wiz want a veteran addition instead of a rookie because they think they can win next year with Arenas and Brendan Haywood healthy. The last time the Wizards had the No. 5 pick, they took Devin Harris and traded him to Dallas.

With Arizona's Hill reportedly slipping right now, you have to simply bet on the best player available at this spot, and that's Harden. But don't be shocked if the Knicks trade up here to get Stephen Curry, either.

Check back Wednesday for more NBA Draft coverage on Doc's.