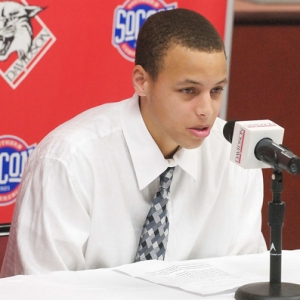 This is the fourth and final installment of my NBA draft prop stories, and hopefully I've provided a little insight. Obviously it's a total crapshoot, with the Timberwolves now likely to be very active on Wednesday and/or draft day after acquiring that No. 5 pick and flotsam from the Wizards for Randy Foye and Mike Miller.

The Timberwolves now have an incredible four first-round picks: Nos. 5, 6, 18, 28. It's expected that they will deal one of the single-digit ones with a double-digit selection to get to No. 2 and get the point guard they now need to replace Foye.

Unfortunately, I think what the Timberwolves just did virtually assures Rubio doesn't play for the Grizzlies. It's almost a lock that Minnesota moves up to No. 2 with its ammunition, and it didn't seem like the Grizzlies really wanted Rubio, and now they won't have to make that decision because he should be gone when they likely move back to No. 5 or elsewhere. The latest reports have the Thunder taking Rubio and pairing him with Russell Westbrook in the backcourt.

I'd steer clear of this bet now, whereas a day ago I thought it was nice value.

Both players' stock is on the rise, and there is zero chance that Curry gets past the Knicks at No. 8. There's also a very real chance that New York moves up to get him. Flynn is the better pure point guard, but he can't shoot much. Curry, meanwhile, is as pure a shooter who has entered the draft in years. I'd say he goes first, but the value isn't worth the bet in my opinion.

I wanted to combine my analysis on these two point guard bets in what is obviously a point guard-heavy draft.

So let's look at the likely lottery picks first: Ricky Rubio, Tyreke Evans, Stephen Curry, Jonny Flynn, Jrue Holiday. The question on winning the lottery bet is whether you think either Brandon Jennings or Jeff Teague will go before No. 14. And I say that Jennings does, so take the value with the over.

Other than the seven players listed above, these point guards also are likely first rounders: Eric Maynor and Ty Lawson. That gets us to nine, which is way under BetED's first-round total. Obviously the site got that number because it projects Patrick Mills, Darren Collison and possibly Nick Calathes and France's Rodrigue Beauboisas or Nando De Colo as first-rounders. There is simply no way that 13 point guards are chosen in Round 1 out of 30 picks. No way. The under here is easy money.

Go ahead and throw out everyone but Williams and Hansbrough on this bet. Supposedly Williams has been promised by the Bobcats that they will select him at No. 12 if he is still there. So will Hansbrough go by No. 11? That's the magic question. The Nets, who pick at 11, had him in twice, but they have a glut of power forwards. There has been talk of the Bulls trading up to No. 11 to get Psycho T as well. But that's too many variables. Take Williams.

--Where will B.J. Mullens be drafted?

I won't bother listing every option on this prop that betED does, but I believe it's a near lock the Ohio State center is chosen between 15-20, which is +100 and the favorite. The Pistons, Bulls, Hawks and Jazz all currently are in this range and all could use a center. Mullens is raw but the No. 2 center prospect on the board.