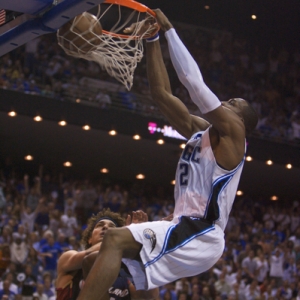 Everyone expected LeBron James to be the superstar opposing Kobe Bryant and the Lakers in this year's NBA Finals, but the Dwight Howard-led Orlando Magic instead have stolen the show and broken the hearts of NBA commissioner David Stern (not that he would admit it), ABC television executives (not that they would admit it) and advertisers at Nike and Vitaminwater.

Actually, the later brand was brilliant in hiring Howard to shoot a "Dwight vs. Dwight" commercial after Howard bested LeBron and the Cavs in the East Finals, ruining the product's Kobe vs. LeBron long-running commercial.

Here's the link to the new ad: Click Here

But we're here to talk betting, so let's give Howard his due and focus on his props. I really like the option on Bodog to bet on historical comparisons to the guy that Howard is most compared to, Shaquille O'Neal. Of course Shaq led the Magic to their first NBA Finals in 1995, and he was the original Superman of the NBA. So it's natural that Bodog offer bets comparing the old and new Superman. Let's take a look.

--Who will average more points -- Howard, 2009 (+3 1/2) vs. O'Neal, 1995: This is stealing money. Shaq simply was a much more dominant offensive force than Howard currently is. O'Neal averaged 28.0 points per game in that sweep by Houston back in '95. The Rockets back then were more concerned with stopping everyone other than Shaq and Penny Hardaway, and that strategy definitely worked.

Can Howard average 25 points in this series to make betting on him worthwhile? No way. He did average 25.8 against the Cavs, but the Lakers have Pau Gasol and Andrew Bynum to throw at him, while Cleveland's Zydrunas Ilgauskas is no longer an inside threat and was overmatched against Howard. In the two regular-season games, Howard averaged 21.5 points against the Lakers.

--Who will average more rebounds -- Howard, 2009 (-1 ½) vs. O'Neal, 1995: This one could be close. Shaq averaged 12.5 boards in the four games against Hakeem Olajuwon and the Rockets. O'Neal also had Horace Grant to help with all the dirty work on the boards.

Howard doesn't really have any help with all his teammates usually around the perimeter. The Magic big man averaged 16.0 rebounds in the two games during the season vs. L.A., and that sounds about right for this series too -- Howard is averaging 15.4 boards in the playoffs, so take Dwight in this one.

--Who will average more blocks - Howard, 2009 (-110) vs. O'Neal (-120), 1995: Blocks are a hard thing to gauge. Shaq, who is three inches taller than Howard, averaged 2.5 back in '95. That's exactly what Howard averaged in the season series with the Lakers. He averaged 2.9 during the regular season and has exceeded 2.5 blocks in the playoff series with the Celtics and Cavaliers (but didn't against the Sixers). Thus Howard is the better bet here.

At least the Magic can rest assured that their newest Superman will not leave for the Lakers after leading his team to the Finals. Nope, Howard said this week he will stay in Orlando, where Shaq still lives in the offseason, as long as the fans want him.

Happy betting and check back with Doc's all through the Finals for props advice and other stories.