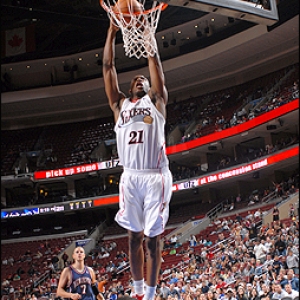 Despite the fact that the Philadelphia 76ers are on a five-game losing streak (1-4 ATS) and have lost all three games (1-2 ATS) to the Boston Celtics this year, I believe the Sixers are an excellent play on Tuesday night against a Boston team that has covered in six of its past eight visits to Philly.

--Certainly reason No. 1 has to be the absence of Boston's Kevin Garnett, who will not return to the team before the playoffs. KG was hoping to suit up for the Celtics' regular-season home finale on Wednesday night, but Doc Rivers ruled that out on Monday.

Garnett has sat for 21 of the team's past 25 games and will have missed nine games in a row with that sore knee by the time the playoffs begin.

"I just don't see a good reason to play him in these next two games. So the plan is simple. We practice Thursday, we practice Friday, and then from what I'm told our first game will be Saturday. So we'll go from there," Rivers said to reporters.

(Rivers did add that backup forward Leon Powe, who has missed the past 12 games with an injury, could return Tuesday night, however.)

--The motivational factor can't be overstated. Boston simply has nothing to play for, although getting the stench of Sunday's blowout loss in Cleveland probably would be nice. But still, with the Celtics having their regular-season home finale the following night, look for many regulars to get limited minutes tonight.

Entering Monday's action, meanwhile, the Sixers had yet to lock up the No. 6 spot, and they are not going to want to enter the playoffs on a long losing streak. They are certainly staring at a loss Wednesday night in Cleveland as the Cavs (even with resting some guys) will be looking to tie the NBA record for home wins in a season. Thus tonight's home finale against Boston is the Sixers' best chance of not going to the postseason as losers of seven in a row. And the fact it's the home finale should have the team amped.

"We have two more games to try to get back and play good basketball," interim coach Tony DiLeo said to reporters.

--Philly played Boston well in the one game in the City of Brotherly Love this season. The Celtics didn't have Garnett in that one either, and Ray Allen won it for Boston on a last-second three-pointer. But that game should give the Sixers some confidence, as they never trailed in the entire fourth quarter - until that Allen winner. That Sixers team still was the half-court version, as Elton Brand was still playing that early February night, albeit barely.

--And saving the best reason for last, Sixers forward Thaddeus Young is expected to play Tuesday night, according to the team's Web site. Young, who has missed the past seven games with a sprained right ankle, went through his most extensive workout since then on Monday.

This is a huge boost for the Sixers, as Young had taken off once Brand was shelved. He is averaging 15.2 points and 5.0 rebounds per game, and his athleticism is really what makes the Philly fast break go. Young's absence is by far the biggest reason for the recent slump and it was thought he wouldn't be back for the playoffs, so this is a huge plus for the Sixers.