Check out this weeks NBA power rankings Get Expert NBA Picks by clicking each of the handicapper pages under the "Advisory Board" section of the left side bar. 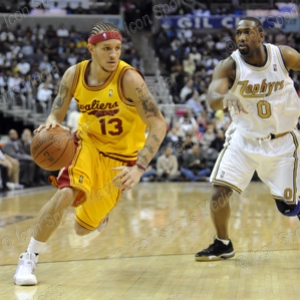 Networks that broadcast NBA games have time slots to fill, so they can't be chastised too harshly for having a conversation about MVP candidates. Even so, their time might be better spent on another topic.

It might have seemed premature to put LeBron James in the MVP conversation last year, but it's a farce to start one without him this season. Former NBA player Jon Barry made a laughable argument Sunday in favor of Miami's Dwyane Wade. Although Wade is undoubtedly an elite player, there's just no legitimate argument to put him or Kobe Bryant ahead of James this year.

Here are the NBA Power Rankings through April 12:

1. Cleveland Cavaliers (65-15) - If you have been a non-believer in the Cavaliers this season, time is running out for you to change your mind. Consistently challenged and given plenty of opportunities for a letdown, the only disappointment Cleveland has dished out is to its opponents and naysayers. With a chance to equal the best home record in NBA history at stake, the Cavs easily could have succumbed to the pressure and lost Sunday to a hot Boston team. Instead, they made it look like a varsity vs. JV scrimmage in their 107-76 win that was over in the first five minutes.

2. Los Angeles Lakers (63-17) - The Lakers have won six of their past seven and taken the cash in four of those wins. If Pau Gasol can keep up the level of play he has displayed of late, then the toughness in the post that the Lakers lacked in last year's NBA Finals shouldn't be a problem this time around.

3. Boston Celtics (60-20) - The Celtics had won six straight before Sunday's blowout loss at Cleveland. While this team is sure to turn it up a notch come playoff time, and will be helped by the return of Kevin Garnett, Sunday's performance was discouraging in the sense that the Celtics never conjured up the effort to make a run after falling behind big in the early going.

4. Orlando Magic (58-22) - The Magic have lost three of their past four and failed to cash in all four outings, amid rumblings that disciplinarian coach Stan Van Gundy's stern ways are taking their toll.

5. Denver Nuggets (53-27) - A blowout loss to the Lakers in their last outing notwithstanding, the Nuggets remain one of the NBA's hottest teams, with wins in their previous eight before the loss to Los Angeles. Chauncey Billups, Carmelo Anthony and friends are explosive enough that they are a dangerous opponent for any team to face in the playoffs.

6. San Antonio Spurs (52-28) - The loss of Manu Ginobli for the season due to injury puts a damper on San Antonio's postseason prospects. It will take a super-human effort from Tony Parker and Tim Duncan and an unexpected contribution from someone else - that means you, Michael Finley - for the Spurs to reach the Western Conference semifinals.

7. Houston Rockets (52-28) - The Rockets have used a balanced offense and solid defense to win four straight and seven of their past 10. Houston is in the Top 10 of all major defensive categories, a trait that should bode well in the playoffs.

8. Portland Trailblazers (52-28) - Recent wins over Lakers, Spurs and Jazz show that the youth-laden Blazers, who have long struggled to beat upper-echelon opponents, might have turned the corner. Only time will tell how prepared they are for the big stage, but wins in eight of their past 10 as they head down the stretch is definitely a good sign.

9. New Orleans Hornets (49-31) - It's a sign of the superstar-heavy times in the NBA when a guy like Chris Paul, who averages 23 points, 11 assists and shoots better than 50 percent from the field, finds himself on the outside of the MVP conversation. He had 31 points, 17 assists and nine rebounds in Sunday's win over Dallas.

10. Dallas Mavericks (48-32) - Despite Sunday's loss to the Hornets, the Mavericks have won five of their past seven and have looked steadily improved as the postseason nears. Dirk Nowitzki and Jason Kidd have each played like the superstars Mark Cuban pays them to be, which is good news for Mavericks fans.

11. Utah Jazz (47-33) - The notoriously erratic Jazz are stumbling at the worst possible time, with losses in six of their past seven. They haven't been able to beat any playoff-bounds teams but, worse, they've been unable to get past the likes of the Timberwolves and Warriors.

12. Atlanta Hawks (46-34) - The Hawks have won three straight to reverse a trend in which they had lost five of their previous six. Although they are ranked No. 10 in both scoring and field-goal defense, they are in the bottom third of the league in rebounding, a major concern come the postseason.

13. Phoenix Suns (44-36) - A club with aging superstars and a team-wide allergy to defense, the Suns will take their exciting style to the comfort of their living room couches come playoff time.

14. Miami Heat (42-38) - The Heat got 55 points from Dwyane Wade in Sunday's win over the Knicks. But it was the 28 points and 16 rebounds from Michael Beasley and 15 points and nine assists from Mario Chalmers that should have Heat fans excited. The Heat will need both rookies to step up again in order to make some noise in the playoffs.

15. Chicago Bulls (40-40) - The addition of Brad Miller, a veteran who can score from the post and with mid-range jumpers, is exactly what this club needed. Teams must now defend a legitimate post presence from the Bulls, which opens up plays for their talented backcourt. They have won eight of 10 overall and clinched a playoff berth.

16. Philadelphia 76ers (40-40) - Five straight losses, four by way of blowout, isn't good news for the 76ers heading into the playoffs. Neither is the recent ankle injury to budding star Thaddeus Young, which might have a major impact on whether they can compete in a first-round playoff series.

17. Detroit Pistons (39-41) - Commentator Jeff Van Gundy made an interesting observation during a recent broadcast when he noted that the Pistons, for all their playoff experience and veteran-laden roster, seem to have been let off the hook nationally for essentially tanking this season. He's exactly right.

18. Charlotte Bobcats (35-45) - The Bobcats have lost five of their past six, and dropped out of the playoff chase, but this season has to be considered a step forward for nomadic coach Larry Brown and the Bobcats.

19. Indiana Pacers (35-45) - The Pacers will have to decide between the flashy Jarrett Jack or the more solid but injury-prone T.J. Ford at point guard. The good news is that recent injuries have given some young players a chance to play, and guys like Roy Hibbert and Brandon Rush have given promising showings.

20. Milwaukee Bucks (33-47) - Provided that Andrew Bogut and Michael Redd return to full strength next season after missing much of this one with injuries, coach Scott Skiles will have a solid foundation from which to continue to build with this club.

21. New Jersey Nets (33-47) - The Nets have lost seven of their past 10 but have cashed in four straight. Saturday's 103-93 home win over Orlando provided a good example of where to find value with New Jersey; the Nets tend to get up for upper-tier teams when they come to town.

22. New York Knicks (31-50) - Mike D'Antoni's overhaul of the Knicks might eventually pay off. Perhaps his best move was the development of Wilson Chandler and David Lee, two underrated talents.

23. Toronto Raptors (31-49) - Toronto's 111-104 win Sunday over Philadelphia snapped a four-game losing streak. Look for an off-season shake-up on the heels of what has to be considered a disappointing season.

24. Golden State Warriors (29-51) - The run-and-gun Warriors have watched their patchwork lineup win four of their past six games with four cashes in the process. No matter who they throw out there, though, the 112.4 points they yield per game is by far the league's worst mark.

25. Minnesota Timberwolves (24-56) - The Timberwolves will have some questions to address in the off-season, and point guard is one of them. Shot-minded Sebastian Telfair showed why he's had a hard time finding a permanent home in the NBA; in Minnesota's 100-97 loss to Phoenix, the point guard had 21 points but failed to register an assist.

26. Memphis Grizzlies (23-56) -The Grizzlies are finishing the season on a high note, with wins in five of their past eight and eight cashes in their past 10 outings. The league's worst offense has scored more than 100 points six times in this span.

27. Oklahoma City Thunder (22-58) - Kevin Durant, Russell Westbrook and Jeff Green give this team a nice young core; some veteran leadership both on and off the court would be a help.

28. Los Angeles Clippers (19-61) - A series of injuries and questionable off-season moves led to another signature Clippers season, one in which they will finish in the bottom five of almost every major statistical category.

29. Washington Wizards (19-61) - Flip Saunders failed to live up to expectations in Detroit, but Pistons fans might wish they had him back these days. Washington certainly could do worse than hire Saunders, who is reportedly their choice for next season. The coach has never done much in the playoffs but brings welcome sideline experience to a club that sorely needs stability.

30. Sacramento Kings (16-64) - Shrewd moves through the draft, free agency and trades made Sacramento one of the NBA's elite clubs earlier this decade; a similar effort will have to be made in the next few years to reverse this club's fall from grace.