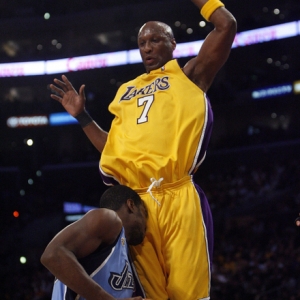 The Orlando Magic did a great job of covering Ray Allen and Paul Pierce as the seconds ticked down at the end in Game 4, but that left Glen Davis wide open, and "Big Baby" swished a 21-foot jumper to tie this series at two games apiece.

But in reality the fault for the loss was the Magic backcourt, which shot 14-for-51 from the floor. Starters J.J. Redick and Rafer Alston were awful, making two shots combined and scoring a total of seven points - 26 less than Allen and Rajon Rondo's total. In the three games in which he has played, Alston is 7-of-29 (24 percent) from the field, including 1-of-12 from three-point range. Think the Magic miss Jameer Nelson right now?

The only positive from Game 4 was former starter Courtney Lee figuring out how to slow Eddie House, holding the sharpshooter scoreless after House had burned down the Magic for an average of better than 17 points per game and stupid 70-plus percent shooting. There's a chance that Lee returns to the starting lineup tonight in place of Redick.

Orlando is a two-point BetUS underdog tonight, but the Magic finished in a tie with the Celtics and Cleveland for the second-best road record in the league behind the Lakers during the regular season. And of course the Magic took Game 1 in Beantown and are 3-2 on the road in the postseason.

The only real injury concern heading into this game is the strained shoulder that Boston center Kendrick Perkins suffered near the end of Game 4. But he didn't even have an MRI on it Monday and is expected to start tonight.

"I'd be lying to you if I said I was 100 percent but I don't think anybody is really 100 percent in the playoffs," Perkins said to reporters. "It's going to take time."

If he hurts it again (and it's been a recurring problem), the Celtics are probably dead meat as their depth behind Perkins is virtually nil. In Game 4, for example, the entire Boston bench managed two points.

Did anyone see the Game 4 result coming? The Rockets were playing their first game without Yao Ming, and everyone was assuming that the Lakers would roll to an easy victory (L.A. was a road favorite) and then wrap this Western Conference semifinal up tonight back in Hollywood.

Yet the Rockets played their most inspired ball of the season, leading by 29 points at one point and never trailing in a 99-87 win, meaning this series will go at least six games and will return to Houston.

"They didn't anticipate the energy that they were going to come with," said Lakers coach Phil Jackson, who had warned his team about taking Houston too lightly. "This team has a Jekyll and Hyde in it, a little bit, I'll admit that."

Young Rockets point guard Aaron Brooks was the best player on the floor with a career-high 34 points, as, in an amazing stat, Houston improved to 4-0 all-time against Los Angeles without Yao (regular season and postseason). The team definitely seems to have better ball movement when Yao isn't planted down low.

But Sunday's win was certainly all about emotion, and doing that again shorthanded and in front of a hostile crowd seems a long shot. Thus the Lakers are 12-point favorites on BetUS.

But they also might be shorthanded tonight as forward Lamar Odom, who has been starting for Andrew Bynum, is questionable after taking a hard fall in Game 4. He will officially be a game-time decision with what is being called a bruised lower back. The L.A. Times reported that Jackson hinted he probably wouldn't start Bynum against 6-foot-6 Rockets center Chuck Hayes. Instead, Josh Powell could come off the bench and take Odom's spot or Luke Walton could get the call.

L.A. also needs to get something more out of Derek Fisher, who seems worn down. The veteran is averaging just 7.3 points and 38.1 percent shooting in this series. At least the Lakers can probably count on getting more than 15 points from Kobe Bryant, which is what he was held to in Game 4 - Kobe averaged 35.0 ppg in the first three games.