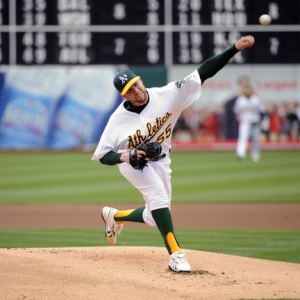 "Who the hell is this guy?"

Honestly, that's the first thought that goes through my head when I see the name of some random rookie or some callous call-up on the board as a probable starter for a Major League Baseball game. My first instinct is to fade these inexperienced and unproven arms and most of the time this first instinct is rewarded handsomely.

This year a variety of factors have resulted in more Random Dudes not only making starts but also sticking in rotations through the first two months of the season. Injuries, ineffectiveness, and one of the most brutal schedules of recent memory have all conspired against pitching staffs across the league and led to numerous opportunities for young guns on the bump.

But here's the rub: some of these guys have been pretty freakin' good. None of the young arms that we've seen so far this year are on the level of phenom Tim Lincecum, who went from mid-season call-up in 2007 to Cy Young in 2008, his first year as a full-time starter in the Majors. But there are several arms out there that could be on par with 2008 breakthrough performers like Johnny Cueto, Glen Perkins and Armando Galarraga.

Here are five young pitchers, mainly call-ups and rookies, that I think have solid long-term earning potential throughout the 2009 season and are worth keeping an eye on:

Skinny: After a brief cameo in the bullpen in late April Outman has been very solid since reentering the rotation. He's won five of six starts and allowed just 11 earned runs in 44 innings for a 2.25 ERA. He is the quintessential "soft-tossing lefty" who uses a plus-slider to get batters out. Lefties are hitting just .122 against him and righties are stuck at just .226, so Outman has been doing work. I think he's got some potential for success, but the problem is that the A's are pathetic this year so he won't get much support. Also, besides Wednesday's win at Chicago and a loss at Texas his five prior starts had come against slumping or light-hitting teams like Seattle, Arizona, Kansas City, Toronto and Tampa Bay.

Advice: Outman should be more of an 'under' starter than a "wins" starter. He can get people out and I think he's legit, but I just don't like anything about this Oakland team.

Skinny: Porcello had as good of a May as any pitcher in the Majors. He went 5-0 and posted a stellar 1.50 ERA in those five outings. He took a loss on Tuesday, giving up three runs in four innings to the Red Sox, but that was the first time in over a month that he'd allowed more than two runs. Porcello is still a virtual unknown. He made 14 starts in the Florida State League last year and posted a 2.66 ERA and has been in the Tigers rotation since Day 1 of this season. The results have spoken for themselves. He has a 1.25 WHIP and a 2-to-1 strikeout-to-walk ratio.

Advice: I think he's the real deal, but he needs to start going longer into games. His six wins lead the team but I'm still wary that the Tigers are overrated. Don't be shy about backing the rookie but be wary of the prices you are playing him at.

Skinny: The rookie righty has only made three starts but two of the three were impressive. He shut down the Brewers on May 23 for zero runs in seven innings and then took a tough loss with six innings and three runs allowed against the Red Sox on May 28. But in both games Swarzak was hitting his spots and showing real nice life and movement on his pitches. But he got slammed for one big inning against Cleveland Wednesday and came back down to earth a bit. I will say that lefties, in all three games, hit the ball hard off this kid. But there aren't tons of Big Boppers from the left-hand side in the Central (the two best lefties, Justin Morneau and Joe Mauer, are his teammates) so he could be a decent value play this year.

Advice: This is a kid that I like and someone I'm definitely going to keep my eye on. He's had three tight umps behind the dish in his three games and - with the exception of one bad inning - he's still been exceptional. Minnesota has a history of bringing up kids and watching them excel so I want to be one of the first on the bandwagon.

Skinny: After watching this kid dominate during the 2008 postseason, David Price should be a stranger to no one. However, this is still the lightning lefties first year as a starter. And after watching highly-touted prospects like Homer Bush and even Joba Chamberlain struggle in their rookie years I don't know if Price is as much of a "sure thing" as he seems. The books are going to be all over this kid and I doubt that there will be much value backing him. And in his first two starts of the year he only gave up three combined runs but he only went nine combined innings, including a 100-pitch, 3.1-inning outing against Cleveland in his first start.

Advice: I would be very careful about the price you pay to back, um, Price. He reminds me a lot of Joba Chamberlain in terms of hype and potential, and both guys try to strike everyone out. Chamberlain is just 3-6 as an underdog or favorite of -150 or less and 11-2 as a favorite of -151 or more. So you have to pay to play. I think it will be the same situation with Price. The other problem: the Rays just aren't that good this year.

Skinny: Wells is going to start to pop up on a lot of radars because of his seven innings of no-hit ball against Atlanta on Tuesday night. But the problem is that he lost that game (even if his loss had absolutely nothing to do with him) and that this year the Cubs are just 1-4 in his five starts. He has a stellar 1.69 ERA in five starts and 32 innings and has an eye-popping 4-to-1 strikeout-to-walk ratio. Also, he's a pure three-pitch guy with a plus-fastball and solid slider and change. But the downside is that he plays for the Cubs so he's already going to be overpriced. And after the no-no nonsense he's not going to sneak up on any bettors. I'll tentatively give Wells a thumbs up, but he is throwing too many balls to right-handed batters and catching way too much of the plate to lefties.

Advice: We're caught in between with this kid. He's good. There's no doubt about that. And his 1-4 mark is just bad luck (and Kevin Gregg) so I think he is due. But as his prices go up I'm going to be less inclined to back him, especially as the season goes on and the games get more intense in their ultra-competitive division.