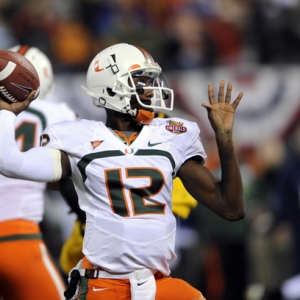 I can't tell you how excited I am to be writing about college football again. If I am writing about it then that means that the season isn't far off. Not to overstate things, but college football is the greatest team sport on the planet. It's been several months since I have written regularly about the sport, so it's time to start to shake off the rust - kind of like my own summer practices. With that in mind, let's look at six teams that have the potential to take a big step forward this year:

Miami Hurricanes - Some of the motivation for this team will come from the top - coach Randy Shannon needs to succeed to save his job. There is much more to it than that, though. The biggest advantage the team has this year over the past is that their QB situation is stable. Robert Marve is now at Purdue, so Jacory Harris is unquestionably the No. 1 guy. He'll have the help he needs as well - the offense has been totally overhauled by innovative new offensive coordinator Mark Whipple. Harris has the talent, and he has some decent talent around him as well. They have an extremely hard start to their schedule - four tough games in a row - but if they survive those then this team could be a force in the ACC. They aren't the best team in the conference, but they are far from the worst, as well.

Michigan Wolverines - If you know anything about me then you aren't surprised that these guys are on the list. I bleed maize and blue, so last year was obviously hard on me. You don't have to be as close to the situation as I am, though, to be reasonably optimistic about the prospects of this team. Coach Rich Rodriguez always enjoys a big jump forward in his second year with a program. He has been able to get the personnel in place that he needs. Tate Forcier will be a big step forward at QB from last year, even if he is just a freshman. The defense has been overhauled, and a new coordinator is in place. The schedule is reasonably favorable. As much as I wish I could, I obviously don't believe that my boys will be nationally relevant this year. They'll be a heck of a lot better than they were last year. In fact, I am certain I will be setting aside a day to watch a bowl game - one after Christmas.

Notre Dame Fighting Irish - I hate the Irish with every fiber of my being, but  just can't keep them off this list. QB Jimmy Clausen should finally come into his own this year - especially with Dayne Crist chasing him up the depth chart. Coach Charlie Weis really has no excuse not to have things figured out by now, and he has continued to recruit well. Most significantly, though, the team plays the softest schedule of any major team this year - softer than any major team has played in many years. Nine of the games seem like very likely wins if the team plays even somewhat up to potential, and none are impossible except maybe for USC. This team will improve this year because even they aren't pathetic enough to ruin this gift.

Arkansas Razorbacks - Bobby Petrino is another second-year coach poised for a big step forward. He has a real QB he can do something with this year in the form of Ryan Mallett. Michael Smith is one heck of a running back who should only move forward from last year. The receiving corps is good, both lines are solid, and the defense is competent. The team will score a bunch of points, and they'll make life difficult for opponents. The schedule is obviously tough because they do play in the SEC, but given that fact it's as easy as it can be with plenty of soft spots. Arkansas took a step back the last couple of years, but they could be right back up to the line this year.

Buffalo Bulls - Turner Gill was the hottest coaching commodity in the country after last season, yet Buffalo somehow managed to keep him on board. They won't regret their decision. QB Drew Willy, a four-year starter, is gone, but that might not be a bad thing. Willy was talented, but he was far from mobile. New starter Zach Maynard is much more of a duel threat, and he'll add an extra depth to an offense that could be predictable at times last year. Two seniors - running back James Starks and wide receiver Namaan Roosevelt - are back, and both have NFL skills. The defense is young, but there is promise on the line, young talent in the secondary, and a dominant linebacker corps. The non-conference schedule is mostly soft, and the MAC is going to be down a bit with the departure of some high-profile quarterbacks. Buffalo won the MAC last year, but they should be able to win it much more easily this year.

Washington Huskies - It's hard for a team not to improve when they were a dismal 0-12 last year. Washington could really take a step forward, though. It's hard to know why Ty Willingham was such a lousy coach, but he clearly was. Now that he's gone, Steve Sarkisian brings enthusiasm and new ideas to a team that desperately needs both. Sarkisian has one big thing going for him in this monumental task - Jake Locker is one heck of a quarterback. He's finally healthy, and if spring practice is any indication then Sarkisian is prepared to use Locker's strengths much more than Willingham ever did. The team will at best be 1-2 after three games since they face LSU and USC over that stretch, but the Pac-10 isn't particularly strong, and Washington could make a wave or two this year.