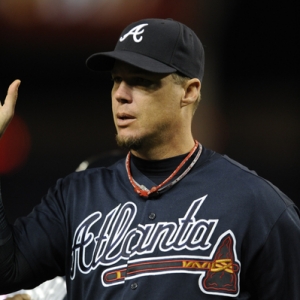 Atlanta's Turner field has gone from being "The Launching Pad" to "The Lily Pad".

The Braves can't score. I almost feel like they won't or simply don't want to score, but then I realize that's about as ridiculous as John Rocker or public education in Georgia. But the fact of the matter is that the Braves are an 'under' team in a league full of teams that can't stop scoring and giving up runs, and I don't see that changing any time soon.

Atlanta started the year with a power-packed lineup that came out firing. They started off 5-1 while averaging 6.33 runs per game through their first two series. However, since April 14 the Braves have played 15 games and have scored more than four runs just twice. They are 4-8-1 against the total during that stretch and were it not for their still-shaky bullpen I'm not sure if they would have gone 'over' more than twice during that span. The team is No 27 in runs scored with just 85 through 21 games and they are No. 21 in hitting at just .257.

Injuries have been the primary culprit in Atlanta's wayward offense. First, it was an injury to Chipper Jones that sidelined the Hall of Fame slugger for five games. Next came the mysterious eye injury to cleanup hitter Brian McCann, who had been off to a rip-roaring start. Throw in the predictably gimpy Garrett Anderson and his litany of ailments, as well as three missed games from Yunel Escobar, and that's half of the players that were in Atlanta's Opening Day lineup that have missed time and will continue to miss time.

"You can do without one person in the lineup, but when you get two or three people out, it starts getting tough and you start pressing to score runs," right fielder Jeff Francoeur said in published reports. "You can't do that, not in this game."

The latest scoring lull seems to be rock bottom of a three-year downturn that has seen the Braves go from being one of the best offenses in the Major Leagues to one of the least reliable lineups you can find. In 2006 the Braves were No. 5 in the league in runs and were the No. 1 team against the total that year. They slid to No. 9 in runs in 2007 and were a pedestrian No. 16 in runs last year, sliding down to the No. 23 team against the total in 2008. This year their 8-12-1 O/U mark is third worst in the Majors.

The other side of the Braves 'under' coin has been that their offseason pitching acquisitions have worked. (Someone tell the Yankees that they could have had twice the staff at a quarter of the price!) Atlanta has rectified the problems with its rotation and has both the No. 7 team ERA in the league while also being No. 3 in quality starts at 12.

So it's just that easy - take a hobbled lineup and some strong starting pitching and you have an 'under' machine. What is most striking about Atlanta's failures against the total is that the league, as a whole, is topping the total at a healthy 54.3 percent clip.

Here are three other teams that are having trouble getting men across the plate and have become strong 'under' bets:

Houston (6-15-2 vs. total)
With a lineup including Miggy Tejeda, Lance Berkman, Carlos Lee, Pudge Rodriguez, et. al and a rotation full of washouts and has-beens you would expect the Astros to be sailing past totals left and right. Quite naturally, the opposite has occurred. Houston has scored the third fewest runs in the Majors while allowing the eighth fewest runs. This was a similar problem the 'Stros had last year with their offense: everyone seems to be standing around waiting for someone else to get the job done. Houston was the league's second best 'under' wager last year at 67-89-5 (57.1 percent on the 'under') and from what I've seen this season that won't be changing anytime soon.

Cincinnati (9-12 vs. total)
The Reds have one of the best rotations in the National League and are trotting out five guys that give them a chance to win every day. However, the offense hasn't held up its end of the bargain. The Reds have mustered the fourth fewest runs in the Majors. The main reason has been the struggles of cleanup hitter Brandon Phillips (.188 average) as well as Edwin Encarnacion (.127). Until these two veterans get going this offense is going to remain the Big Dead Machine.

Kansas City (8-13 vs. total)
Once again, this is about great starting pitching and an underachieving lineup from which big things were expected. Behind the stellar work of Zack Greinke, the Royals have the league's No. 3 overall ERA, they are No. 1 in WHIP, and they have the most quality starters of any team in The Bigs. The offense has been very slow to get off the ground, with an injury to cleanup hitter Jose Guillen helping to stifle the attack. I believe that the Royals pitching is going to slide a bit because I don't expect the back end of their rotation to hold up for the full season. They are just 3-6 against the total on the road. I will look for that trend to continue as well.