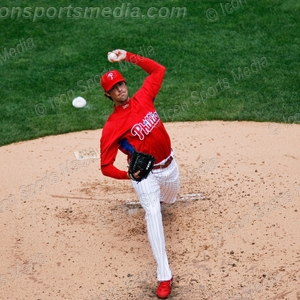 "What is that feeling when you're driving away from people and they recede on the plain till you see their specks dispersing? - it's the too-huge world vaulting us, and it's good-by. But we lean forward to the next crazy venture beneath the skies."
- Jack Kerouac, "On the Road"

Everyone loves a road trip. It's as American as apple pie and nuclear warheads. It's the source of the great strength of this wacky community alliance we have in the Great U.S. of A - the freedom of mobility.

Perhaps as much as any group, baseball players abuse this privilege to the extreme. They spend the better portion of their years as professional nomads, hired thugs and artisans plying their craft from city to dream-woven city across this great land. Yet in a trial-filled life, the wear and tear of a journey on the soul, skin and psyche is another challenge to being a professional baseball player.

Think of any long road trip or vacation that you have been on. At the start it's nothing but confidence, promise, excitement and the intoxicating rush of possibility. But then think about the back end of that trip. In most instances I'm sure by the end of your journey you are a bit weary, pining for the comforts of routine and familiarity; a bed, a couch, quiet, total self-determination.

It's no different for baseball players. And now one of the things that I've started to bet against is a team at the back end of a significant road trip. This is not a novel concept and it has been the fodder for chat room cappers and professionals for ages. But tracking the success rate of this idea over the last two years lends mathematical credence to my initial idea.

Basically, bet against any team that is playing the final game of a road trip that has encompassed at least three cities and at least eight games. Since the average road trip is between 1-2 cities and 3-7 games anything beyond that requires a little extra, mentally and physically, from the teams and players. When they start to reach the finish line teams may start to pack it in - literally and figuratively - at the back end and that makes them susceptible to defeat.

Most teams only play about three "extended road trips" per season. So that offers limited options for any one club. But when you consider that this is a factor for all 30 teams you are talking about nearly 100 trials each season.

Last year teams went just 42-64 on the end of an "extended road trip". That is a solid 60.4-percent success rate. I'm not going to go back through all of the separate money lines, but if we assume approximately +100 for a win and -125 for a loss (that is an average money line of -125 and a play of 1.0 Unit on each instance) then this simple system still yielded an overall profit of $1,150. That right there is solid work for something that takes about five minutes to handicap.

So far this season the "system" (or is it more of a trend?) has again started on a winning note. Teams on the back end of these road trips are just 3-7 this year. By our average money line $100 bettors would be up a solid $325.

Last year there was a significant difference between how the system performed in both the American and National Leagues. American League teams were just 17-35 in these situations while National League teams went 25-29. However, the main culprit that would have mucked our system was the N.L. West. Teams in the West were actually 11-4 on the back end of "extended road trips". They were the only division to have an overall winning record in these situations. I think that pitching matchups and the fact that tams in the West are prone to low-scoring, tight games, and the fact that their travel isn't all that strenuous (three of the five teams are in the same state) all played a role in this outlier.

I fully intend to take advantage of this situation for the rest of the season and I encourage you to as well. Sometime this week on Doc's Sports Blog I will try to type up a list of dates for each team and when they will be playing in one of these situations. That can be a quick-reference for you and hopefully an easy moneymaker for the next five months.