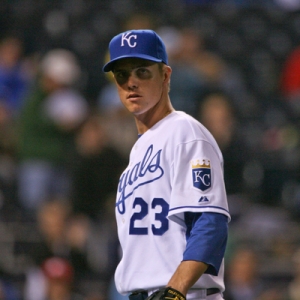 I'm not sure how it happened, but this week we're looking at mini-series in the Major Leagues. Two-game sets are apparently all the rage this week and I can't recall another period in which this was the case. However, I also feel like this "scheduling quirk" is actually going to have a significant impact on this week's action and how we should plan on playing it.

All 30 Major League teams are in action tonight in the first of a two-game series against their respective opponents. Then on Wednesday teams will face another opponent for yet another two-game set. Finally, Friday will start the weekend series, meaning that, going Sunday to Friday, teams will face four different opponents - sometimes in four different cities - in one wild week.

But even deeper than that, another key issue at hand here is that since there are no off days (Monday and Thursday are typical off days) some teams are going to be forced to play as many as 20 games in 20 nights. And while it isn't that severe for all teams, those that haven't been fortunate enough to have a rainout over the past week could be forced into playing two weeks straight. The result is that we should expect a higher scoring weekend since starters and relievers will likely be dealing with some tired, dead arms by Friday night. Also, this raises the risk of injury for players on teams so don't be surprised to see some guys get knocked around over the next 10 days. Further, teams with depth on the bench and in the 'pen are going to have a huge advantage during this recent stretch.

Here are four more examples of the impact that these two-game series are going to have on this week's games:

1. Chase betting is out.

My chase series bets are all predicated on a three-game series. Three games means three chances to hit and dramatically increases our odds. Two-game series are awkward and I think that we're going to see several "sweeps" this week. As a result, there is no way to implement some of our more successful system plays. And I know that I'm not alone in the betting world with regards to chase betting.

2. Travel is going to wear on teams.

For some clubs the two-game sets mean that they will be in three different cities in four days. Let's take the Chicago White Sox, for example. Sunday night they were doing dirt in Arlington on ESPN. Monday they get to face Zach Grienke and then Tuesday they finish up in Kansas City. Wednesday they are back home - their third city in four days - to take on rival Detroit. That's a whirlwind and the extra travel time is going to have an impact on teams on Tuesday (those already looking forward to getting home or the next series) as well as on Wednesday.

It's basically MLB Musical Chairs. Teams played one opponent over last weekend, they will play a second opponent for two games this Monday and Tuesday, they will then play a third opponent for a two-game series on Wednesday and Thursday, and then this weekend they will be matched up with a fourth opponent in a six-day span.

3. No days off are going to burn a lot of bullpens.

Arizona's last day off was April 23 and their next day off isn't until May 14. That means that the Diamondbacks will have played baseball on 21 consecutive days, barring a rainout, by mid-May. This is a team that is already suffering through injuries to its starting pitching staff and is shackled with a weak bullpen. In another week this team is going to be running on fumes and will be getting rolled over.

Kansas City, Toronto, San Diego, the L.A. Dodgers, Florida, the Chicago Cubs and Milwaukee are all in similar situations. None of those teams has had a day off in at least a week already and none will have a day off until at least next Monday. The Royals have played 13 games straight already and then have to make it through this week.

This also means that the recent weather fronts that we've had moving in are going to have long-reaching ramifications on series and teams. For instance, the Yankees didn't play yesterday and likely aren't going to play today against Boston. Not only does this afford them extra rest when the rest of the league is chugging along, but it also A) gets them one day closer to A-Rod's return and B) means that they will have to make up these games with Boston either with doubleheaders or with off days scheduled later in the year. All of that shifts the delicate balance of the schedule.

Washington, St. Louis, the Mets, Braves and Phillies, the Yankees and Red Sox, and the Pirates are all teams that have benefited from games being rained out either on Sunday or Monday. These teams will be a little fresher as the week moves on.