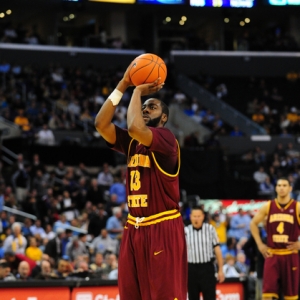 While Kobe Bryant, LeBron James and Dwyane Wade dominated the NBA this season, the general managers for the teams picking at the top of the 2009 NBA can only hope that they stumble upon The Next Big Thing at the shooting guard position. James was the No. 1 overall pick in 2005 for Cleveland, but neither Wade (No. 5 overall in 2003) nor Bryant (No. 13 in 1996) was considered the top players in their classes when they came out. However, history has proven otherwise.

Here is Doc's Sports breakdown of the best shooting guards in the 2009 NBA Draft:

1. James Harden, Arizona State
Heading into last year I was willing to say that Harden was the most underrated player in the country. But after another All-American performance Harden doesn't have any trouble finding admirers now. Harden was absolutely unstoppable one-on-one in college. And while he won't dominate like that in the pros he should step in as a starter and make an impact right away. Harden can do it all with the ball in his hand - pull up, get to the rim, and set up his teammates. One comparison I've read compares him to Manu Ginobili because of his crafty offensive game and I think that's apropos. Harden is not the most athletic player at his position, and that can hold him back. But the smooth lefty is a legit Top 5 pick and could work to be somewhere between Ginobili and a poor man's Dwyane Wade.

2. Wayne Ellington, North Carolina
I absolutely love Ellington's game and I think that he's one of the more underrated players heading into this year's draft. Ellington is not only a pure shooter but he also has great elevation and form on his shot, which will help him squeeze off rounds in the NBA despite being just 6-5. Ellington was the top perimeter scorer on what has been the best team in the country over the last three years and has always risen to the challenge. Defense is an issue and he's not a great passer. But I think Ellington can step in and be a contributor from Day 1. He is a scoring machine on the perimeter and should be a solid pro.

3. Gerald Henderson, Duke
Yes, Henderson is a dickhead. And that's not just because he plays for Duke or because he took that absurd cheap shot at Tyler Hansbrough a couple years back. But despite all of that bad karma I still have to admit that I like Henderson's game. Most Duke players are terribly overrated, which is why Elton Brand and Shane Battier are the only two decent pros to come out of there in the last decade. But I think that Henderson is good enough to perform. He has a great mid-range game and is athletic enough to get to the basket and finish at the next level. He has good instincts and is a solid defender. The Duke Flameout Potential is something to consider but I'd be very happy if my team could score him in the middle of the first round.

4. Chase Buddinger, Arizona
This guy is one of the top X-Factors in the entire draft. Buddinger has all of the physical tools to be an elite NBA player. He is 6-7 and can jump out of the gym, with the ball skills to match. He is a pure shooter and has range from anywhere on the court. He has also had some big games against the top competition in the nation over the past three years. But Buddinger's laidback attitude and lack of killer instinct is something that dogged him throughout his career at 'Zona. He is more of an athlete than a natural baller, but he could be a steal in the middle of the first round. He reminds me a bit of Rudy Gay, and Gay has exceeded my expectations.

5. Tyreke Evans, Memphis
Evans is a physical specimen that was miscast as a point guard last year at Memphis. But I think that the experience actually works in Evans' favor, as he was able to soak the most out of his only year in school. Evans was a beast getting to the basket and was unstoppable last season, including a fantastic 33-point effort in the tournament against Missouri. However, he did mostly face pathetic competition in Conference USA. Evans isn't a natural shooter and shot a horrific 27.4 percent from three-point land last year. The physical tools are there but he is still pretty raw.

6. DeMar DeRozan, USC
Most mock drafts that I've seen have DeRozan in the Top 10 but I'm not ready to crown him just yet. DeRozan has exceptional size for a shooting guard but he might get slid over to the small forward slot in the pros. I think that would be a mistake because I think that he could be a Lamar Odom-type of player. DeRozan really came into his own in the second half of last year and hit double figures in nine of his last 10 games. However, he shot just 16.7 percent from three-point land and has an ugly knuckleball shot at times.

7. Marcus Thornton, LSU
Thornton was the most underrated conference player of the year in the country last season and is a guy that I like as an Eddie House-type scorer off the bench in the NBA. Thornton is a pure scorer that is leaving after just two years at LSU. But he averaged 19.6 and 21.1 points in those two seasons and did so against SEC competition. Yes, the SEC has not been the premier conference that it once was. But it's still full of top-level athletes and is a Big 6 conference. Thornton is a little small at 6-4, 205 but the kid is skilled in all facets and really has a lot of potential.

8. Dionte Christmas, Temple
Christmas is one of the most explosive scorers in the country and at 6-5 he has the size and aggressiveness that really piques the interest of NBA general managers. He managed to find double figures in scoring in 90 of his 98 games through his last three seasons in Philadelphia and he definitely has that grit and toughness that Philly boys are known for. Christmas really upped his stock last year by outplaying James Harden in the NCAA Tournament and also pouring in 35 points against Tennessee and 21 at Kansas. He's a second-round pick with solid upside.

9. Wesley Matthews, Marquette
Matthews is coming off a great senior season in the rugged Big East where he put up career highs in rebounding, assists, scoring, and shooting. Matthews has good size at 6-5 and is an excellent rebounder. Although not a natural three-point shooter (he shot just 34 percent for his career) he managed to knock down 37 percent last year. Matthews' skill is in the mid-range game and in doing the "little things". He is a second-round pick as well but I think that he could have a strong NBA career.

10. Jermaine Taylor, Central Florida
I'll spare you the cheesy boxing references and puns that have trailed Taylor throughout his career. The bottom line here is that Taylor is a stud and has been one of the top scorers in college basketball over the past two seasons while toiling in obscurity down in Conference USA. He was No. 3 in the country in scoring last year at 26.2 points per game and that includes a stretch in February and March where he scored 38, 35, 35, 45, 28, 29 and 36. Taylor is a little undersized at 6-4 and isn't a great ball handler in the open court. But he is a seek-and-destroy scorer that could be a nice sleeper.

11. Alex Ruoff, West Virginia
Ruoff will be a late second-round pick if he is drafted at all. And the fact that he is just out of the Top 10 shows how weak that this crop is. But Ruoff is one of the purest shooters in this draft and he could definitely be a nice role player on a team with a strong post presence. Consider him a cross between Steve Kerr and Matt Carroll.