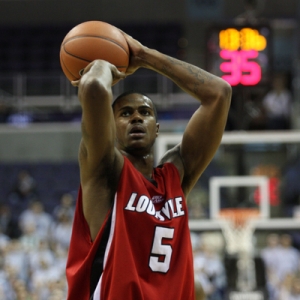 Carmelo Anthony, LeBron James, Lamar Odom and Hedo Turkoglu were key players in the NBA's version of the Final Four last week in the Eastern and Western Conference Finals last week. And while I can say that there probably isn't another Anthony or James on the board for this year's NBA Draft there are some potential difference makers available, even if this position is the weakest in the draft.

Here is a breakdown of the top small forwards in the 2009 NBA Draft:

1. Earl Clark, Louisville
Clark was not the best player on his team last year at Louisville but I think that Clark has slightly more upside in the NBA. Clark is a legit 6-10, 225 and is perfectly comfortable mixing it up down low or stepping out onto the perimeter to do damage. He needs to do some work on his free throw shooting and can be a little soft, but Clark is smooth with the ball. All of the tools are there. But does Clark have the makeup of a guy that can step up and excel in the spotlight. Remember: Terrence Williams was the go-to guy for the Cards last year, not Clark.

2. James Johnson, Wake Forest
Johnson is one of the top prospects on the board and is really, in my opinion, a high-risk, high-reward guy. He could be a bust for a team that takes him in the Top 15 or 20 or he could end up as an All Star. I don't know if there is an in between with him. Johnson has all of the physical tools - great size, excellent build, exceptional athleticism and good skills. But he doesn't have any intangibles. He disappeared too often, played down to the level of his competition too often, and was out of control too often. With some coaching he could be elite. But if he falls into a bad situation he is just going to be someone else that left a year too early.

3. Terrence Williams, Louisville
There are very few players that can "do it all" but Williams is one of them. He can handle the ball, is an exceptional passer, he can score from the perimeter and getting to the basket, he is an outstanding defender and a capable rebounder, he has plus athleticism and is the right size for his position. Williams has proven himself against the top competition in the college ranks and is going to be a very, very good pro. He's being slotted for late in the first round. But if he gets on a good team the guy could step right in and be an impact rookie.

4. Sam Young, Pittsburgh
I am apparently much higher on Sam Young than a lot of NBA scouts. The negatives for him are that he isn't a great "creator" on the offensive end and he turned 24 this year so his potential is limited. But other than that, it's all upside. Young is very athletic and has a great build for an NBA No. 3. He can score anywhere on the floor and is tough on both ends of the floor. I thought he was one of the five or 10 most underrated players in college last year and it looks like he is being overlooked in the draft as well.

5. DaJuan Summers, Georgetown
Summers is a bit of an enigma. He flashed tremendous potential as a freshman on Georgetown's Final Four team but seemingly hasn't advanced since that breakthrough year. The problem is that Summers is a bit of an awkward offensive player. He doesn't have a great shot and isn't an exceptional passer or dribbler. Summers would probably best be served in an up-tempo scheme. And there is no denying that there is still a reservoir of untapped potential with this kid.

6. Derrick Brown, Xavier
Brown was more of a "highlight guy" at Xavier because of his explosive leaping ability. But that type of athleticism, along with his 6-8, 225 frame, make him a worthy NBA prospect. Brown was inconsistent while with the Musketeers and really was a non-factor in some games. But when he asserted himself he could be unstoppable for stretches. He shot 71 percent, 61 percent, and 50 percent from the field in three years in college. And while most of his points came around the basket he also shot a solid 42 percent from deep while in school.

7. Robert Dozier, Memphis
Dozier is really hard to peg as either a small forward or a power forward. He's definitely a tweener but I think that this game will become more perimeter-oriented on the next level. He has a consistent mid-range jumper but he has never shown the range to be an NBA No. 3. What I don't understand is that while beating up on disgusting "competition" in Conference USA Dozier never really worked on developing his game more. Still a great athlete and worth a dabble.

8. Dante Cunningham, Villanova
Cunningham is kind of the antithesis of Dozier. Cunningham is not a great athlete and not a great rebounder around the basket. But he has excellent ball skills and a proven mid-range game. Cunningham has a good build and was ultra-productive last year in the exceptional Big East. But one good college season doesn't mean he'll be a good pro.

9. Leo Lyons, Missouri
Lyons is really a tough player to get a read on. On the one hand, he is absolutely chiseled and has an NBA body and pro athleticism. On the other hand, he just isn't a very instinctive player and never really took over games in college. And this really sums up how weak this position is this year: Lyons might not even get drafted and he's still one of the top 10 players at his position.

10. Danny Green, North Carolina
Basically, I just needed a 10th guy for this. Green was a very nice role player for the Tar Heels over the past two seasons but I don't think that anyone takes him seriously as an NBA performer. He could hang around because he has a lot of the skills that more physically gifted players lack: hoops IQ, tough rebounder, proven range, and a willing defender.