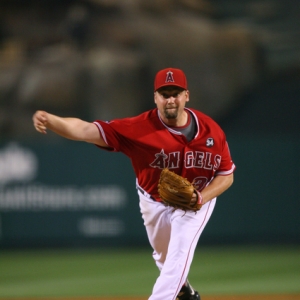 Before he was sent back down to the minors, Pitcher Brett Cecil was a profitable 3-1 and had earned his backers a solid +210. But having watched every one of his starts I can honestly say I have no idea how this guy was at all successful in Major League Baseball. And since Toronto sent the lefty back down to the minors after his last start I would say that they agreed with me.

Some pitchers don't have good numbers and aren't pretty to watch but they manage to turn a profit for their backers. Baseball is a funny game like that and certain performances and statistics defy explanation. But there is no hiding in this sport. The regular season is a gauntlet and will give fakes and phonies enough opportunities to be exposed.

Below I've broken down five young pitchers, mainly call-ups and rookies, which I'm a little bit skeptical of as the 2009 season moves forward. The first four of these hurlers have turned a profit and the last one is a game under .500 this season. But having watched and analyzed their starts I can say with confidence that it's probably not going to last:

Skinny: Palmer is the perfect example of the enigma that is first-year starters. The Angels are 6-1 in Palmer's seven starts and that has actually made him the most profitable starting pitcher in the Majors this year at +775. He has a complete game win against Boston under his belt and a very respectable 4.06 ERA and 1.15 WHIP. However, Palmer has been the beneficiary of some solid bullpen work and a robust 7.7 runs per game of support from the Angels offense. He's been doing a good job of working the corners with is fastball, but opponents are hitting around .350 against his off-speed stuff.

Advice: I would be wary of playing him on falling prices. He's been an underdog in six of his eight starts this year but the more he wins the more respect he'll get from the oddsmakers. Palmer had an 8.53 ERA in two starts last year and he has a 5.83 ERA on the road so I'm not sure how long he can keep it up.

Skinny: Vargas is a slick lefty that's doing work for a soft N.L. West team. The Mariners are 4-1 for +400 in Vargas' starts and he's posted a sick 3-to-1 strikeout-to-walk ratio in his last threes outings. He's given up two runs or less in all five of his starts this year and has an exceptional 1.93 ERA. And three of those games were against the Angels, Red Sox and Rangers, so it's not as if he's rolling over powder puffs. Vargas is a fastball-changeup guy and righties are hitting just .205 against him. However, Vargas has had a few cups of coffee in the Majors before and in his four starts prior to this year he was 1-3 with a 10.42 ERA. Also, he's doing a great job of keeping the ball away from right-handed hitters - over 52 percent of his pitches are either on the corner or just off the plate - but he's catching a lot of the plate. That's good because he's not walking guys but it is bad because he's a pitch-to-contact guy that I think is going to start getting hit hard.

Advice: I think it might be worth riding Vargas while he's hot. But I don't like his long-term prospects. Again, I watched this guy with the Mets and he was a disaster. It's tough to just ignore the fact that he never had much success in the Majors - he had a 5.82 ERA before this year - or even the minors prior to this recent run.

Skinny: I've seen three of Huff's four starts this year and I can say this: the rock is not impressed. Huff has very mediocre stuff and he leaves a ton of balls up in the zone. The Indians optioned Zach Jackson, an equally awful lefty, after his last start so it looks like Huff will get a look. He had one decent start against Tampa Bay on May 28 in which he didn't allow a run in four innings of a getaway game that was interrupted by rain. Other than that it's been 17 runs in around 12 innings for a robust 12.75 ERA.

Advice: Fade, fade, and more fade. I don't think Huff will be around long enough to take full advantage of but we need to bet against this kid hard while he's up with the Big Club.

Skinny: The Diamondbacks are 2-1 in Buckner's three starts since he left the bullpen and entered the starting rotation. However, I think this is a great "sell high" situation after Buckner picked up a win with six scoreless innings against the Dodgers on Monday. Buckner was facing a tired, uninspired team that night. For the year the right-hander has a 5.24 ERA and had given up 13 runs his previous 15 innings. Also, a weak Arizona bullpen is going to cost him wins as well. And since the kid hasn't proven that he can eat those innings he's going to be that much more susceptible to having leads blown for him. He's a fastball-curveball pitcher that will mix in a changeup. But none of the pitches are that impressive.

Advice: Opposing batters are hitting .289 against Buckner. That's not conducive to long-term success. He doesn't have as good of stuff as teammate Max Scherzer, and after two years Scherzer is just 5-12 in his 17 starts. Also, Arizona isn't any good this year and wont' back Buckner even if he does throw well.

Skinny: How much you like Bergesen really depends on how much you like the Orioles. The rookie righty has been very consistent since joining the O's rotation: he goes six innings and he gives up four runs. Prior to his past two peak performances against the Tigers on May 29 (eight innings, two runs in a 7-2 win) and Seattle on Tuesday (seven innings, 2 runs in a 3-2 loss) Bergesen went six innings (+/- two outs) and gave up four runs (or three runs, twice) in five straight starts. Not good, but not bad. The trouble is that the Orioles went 1-4 in those five starts and they are just 4-5 in his starts overall. Bergesen is mainly a fastball-slider hurler, and he'll work in a mediocre changeup to lefties. But the problem here is that righties are hitting a disgusting .330 against him. If he can't even get right-handed hitters out, as a righty, I don't see him sticking around long.

Advice: Bergesen isn't very good but he's better than the O's alternatives. I think he's really going to struggle against divisional opponents that see him two or three times because he is primarily a two-pitch pitcher that isn't going to fool people. But the O's offense will score a lot of runs for him so he could scum out some wins.