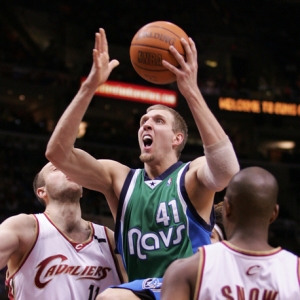 The other day I stumbled upon a USA Today story about the NBA from 2002 that proclaimed: "Foreign Players Now Draft's Must Haves." The article cited the success of players like Dirk Nowitski, Peja Stojakovic and Hedo Turkoglu since being drafted and the author pointed out that three of the five players on the 2001-2002 NBA All-Rookie were non-Americans.

There were 14 players drafted that year that were from foreign countries and didn't play college basketball and 17 foreign-born selections made overall. I think it's safe to say that was the Golden Age of Hoops Diversity and it meant that these Euros had come a long way since 1989-90, when the first "real" class of international players arrived after FIBA made it legal for pros to play in the Olympics.

However, since that article was written in January of 2002 there have been 35 foreign-born players that didn't play college basketball that were drafted in the first round. Exactly five of them -- Yao Ming, Nene, Nenad Kristic, Andrea Bargnani and Rudy Fernandez - have averaged 10 or more points in their careers. Ming is the only one to play in the NBA All-Star Game.

I think that it's very safe to say that the impact of foreign players in the NBA has certainly waned, if not at least plateaued. There are still many very solid contributors that were born outside of the U.S. and A but we have seen a significant downturn in the number of players being drafted over the last several summers. There had been five foreign players drafted every year between 2002 and 2007 but then that number dipped to just three last season.

Also, we're not only seeing less foreign players make the leap to 'Da League but we're seeing less of them play at a high level. Only five of the 36 All-Rookie NBA First Team selections since 2002 have been foreign-born and only seven of 38 Second Team picks were from overseas. That's only about 15 percent and outside of Yao it's really tough to peg any of them as being anything more than good backups.

Scouting the crop of international players that are entering the 2009 NBA Draft this month I don't see these recent trends breaking any time soon. There appears to be two players - one of them an American that skipped college to play in the Euro pros that I'm counting as "international" - that will be drafted in the lottery. But both have huge question marks and I'm not sure if either will be difference makers at any point in their careers.

Here is a breakdown of the top foreign players in the 2009 NBA Draft:

Rubio can't dunk. I know, I know: that's a really superficial measure when considering the merits of a starting NBA point guard. I mean, a lot of them can't dunk so what's the big deal, right? Well, seeing an NBA point guard prospect playing at or above the rim shows a level of athleticism that I want to see. A lot of guys are going to be floor managers. In order to project at the Next Level you have to be athletic enough. And don't say, "Well what about Steve Nash?" That guy is a freak of nature.

Rubio has excellent ball skills and blah, blah, blah. All I know is this: the guy doesn't dominate in Spain. He is a very good player on a very good team. But when people are talking about him as a Top 3 pick I want to see a guy that dominates. Rubio doesn't. There are questions about his shot as well, and when you add all that up I think he has huge bust potential. I think he'll max out as being a good backup point guard. You want to waste a Top 5 pick on that?

Jennings is an American who took the rare path of skipping college and prepping for the NBA overseas. In some ways he is the anti-Rubio because Jennings' key assets are all physical. He is explosive and has great quickness but at this stage he lacks the mental game to be considered NBA ready. However, playing in a Euro league may have been the best thing for him since he likely started to learn the nuances of the game. However, this kid needs more seasoning.

A soft small forward in Europe, I think that Casspi has some solid potential late in the first round. One scouting service compares him to Andres Nocioni and Hedo Turkoglu because of his polished inside-outside scoring game and his adeptness handling the ball. However, he has the classic Euro Achilles heel: he's soft. Casspi is a bit weak physically and mentally and some wonder how he'll hold up in a full season of 'Da League.

At 6-9 and 236, Claver has the physical tools to be an NBA player. He's long and athletic and can get up and down the floor. The kid is just 19 and like the Rubio/Jennings dilemma I would say that Claver is kind of the anti-Casspi. While not as polished offensively, Claver is reportedly a pretty tough 19-year-old kid that is fearless attacking the basket and very aggressive on both ends of the floor. Those are some buzzwords that I like to hear when talking about the Euro kids.

This is a kid with some promise but by all accounts he is very raw at the offensive end. And since he is still pretty scrawny at 220 pounds I have to say that this is a "draft and stash" candidate right here. Described as a "role player," Jerebko really won't bring much to the table for any NBA team next year.