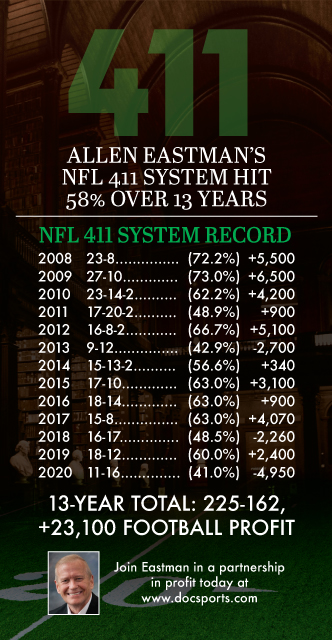 The story of how the “411 System” came to be sounds like some sort of gambler’s old wives tale or urban legend.

Several years ago a professional gambler finally perfected what he believed to be an all-encompassing NFL football betting system: The “411 System”. This NFL football betting system took into account a range of NFL variables like coaching, quarterback play, defense, and even weather. There was a point value assigned to each variable and teams were compared based on their scores according to the system list.

Doc’s Sports offers free NFL expert picks against the spread for every game on our NFL predictions page.

And the best NFL football betting system was successful. The bettor that started the system allegedly used to sell the picks for as much as $5,000 per play and used it to cream the books for over a decade. He could charge so much because the system produced at nearly a 70 percent rate year-in and year-out.

Then, unfortunately, the originator of the “411 System” passed away, seemingly taking the secrets of his NFL betting system with him.

However, several bettors that had been following the system were able to recover some stats, documents, and other information. There were some missing pieces and some holes in the formula and those pieces were then brought to Doc’s Sports handicapper Allen Eastman to decode and decipher. And after a year of diligent work Eastman and a small group of programmers were able to unlock the secrets of the NFL betting system and use it to produce an incredible amount of football profit.

During the 2008-2009 NFL season the “411 System” posted an incredible 23-8 record. This highly selective system generally only yields one or two plays per week but, as you can see, those picks proved to be dominating.

Then, in 2009-2010 Eastman decided to release the “411 System” plays to his clients and the results were equally exceptional. Eastman’s version of the system went 27-13 this season for an amazing +63.5 Units and around $5,600 in profit for $100 bettors that played only these predictions. The dynamic football betting system also helped Eastman finish No. 3 out of 328 contestants in the very prestigious $1,500-buy-in Las Vegas Hilton Super Contest.

For obvious reasons, Eastman won’t reveal all of the variables that factor into what we feel to be the best NFL betting system out there. But the idea is that there are nearly 50 components that make up the system. Each of those components is given a point rating and teams are then scored and compared based on those ratings each week.

Eastman used to handicap games according to a football betting system with 90+ factors. But after further improving and personalizing the system with 90+ factors – Eastman has added new filters and statistical measures – he has created The 411 System of Football Betting and is the most elite, profitable version of this football betting system ever devised.

The 411 System is based on a very complicated and unique grading system that gives a score to every single NFL game based on a variety of components.

For instance, a team that has a quarterback with a rating of 100 or higher would get 10 points. A team with a rookie quarterback in a playoff game would be -10 points. And so on.

After all of the components are figured for each team the ideal differential is for one team to have 30 or more points than its opponent. Those few plays become official “411 System” plays.

For example, let’s say that Chicago is playing New York. If after combing through the 60 components of the system Chicago scores a 70 and New York scores a 60 then this is a no play and Eastman simply moves on to the next game. But if Chicago manages a score of 105 and New York scores just 70 then the alarms go off and Eastman knows that he has a play that fits his “411 System”.

The “411 System” is really one of the most remarkable NFL handicapping systems in the world. And Allen Eastman is proud to use this system to help his clients destroy the books and earn an amazing profit in NFL betting. When fall rolls around and the pigskin starts flying don’t forget about this proven moneymaker. And know that at least one thing that is too good to be true in gambling actually lives up to its billing.

Forget all those prepackaged systems that you see flooding the Internet when you search for NFL Betting Systems.  The fact is most of them simply don't work.  Why?  Because the NFL environment is constantly changing year after year and week after week with new players, injuries, and coaching changes just to name a very few.  Situational handicapping will always be the best system for handicapping any sports.  Statistics dating back to 1970 may look good on paper but will have very little do to with the actual game being played next weekend.  In my close to 40 year in business I can make that one promise.

The power of the 411 System is that while the components of the system are fundamental, the scoring system is constantly changing and in flux. As a result, this incredibly profitable football betting system is able to adapt and adjust to the NFL as the game changes.

Give Eastman’s 411 System a chance. It has been making many big-time players tens of thousands of dollars for many years and you can only get these plays exclusively at Doc’s Sports. There are other imitators out there online. But this is the true 411 System and it is the most potent weapon that any NFL bettor has against the sportsbooks. Sign up today and see for yourself!!!

Click Here to visit Allen Eastman’s page on our website and sign up for his football picks. If you have any questions about our service or this very popular NFL football betting system call 1-866-238-6696 or email service@docsports.com